I didn't vote for Mrs Thatcher. This is not just the slogan that launched a million tee-shirts but, in my case, absolutely true, even though I was old enough to vote for her Conservative Party. But this short blog entry, written the day after she died, is neither an attempt to hurl abuse at her nor a recognition that some – but not all – of the things that she did (and which I may have opposed at the time) were probably necessary to move the UK out of its stupor in the 1970s. Instead this will focus on one facet that has gone almost unremarked in the obituaries today: Mrs Thatcher was the first major Western leader to "get" Climate Change.

Trained as a research chemist at Oxford, Mrs Thatcher was proud to undertake a dispassionate analysis of the facts placed before her; this sometimes led her to intellectually appealing but socially divisive (and ultimately foolish) policies. But when presented with the relatively immature findings on the science behind climate change (still then known as global warming) she understood that this was an existential threat – more dangerous for the UK, even, than the European Union!

As far back as September 1988 she said in a speech to the Royal Society:

For generations, we have assumed that the efforts of mankind would leave the fundamental equilibrium of the world's systems and atmosphere stable. But it is possible that with all these enormous changes (population, agricultural, use of fossil fuels) concentrated into such a short period of time, we have unwittingly begun a massive experiment with the system of this planet itself.

This was later emphasised when she told the party conference:

The core of Tory philosophy and for the case for protecting the environment are the same. No generation has a freehold on this earth. All we have is a life tenancy—with a full repairing lease. This Government intends to meet the terms of that lease in full.

And by 1990 she was confident enough to say:

The danger of global warming is as yet unseen, but real enough for us to make changes and sacrifices, so that we do not live at the expense of future generations. … The need for more research should not be an excuse for delaying much needed action now.

This led to an early lead by the UK Government in taking measures to combat climate change and a broadly bipartisan attitude to the subject. Sadly the early lead has gone, and the UK is not doing much better than most of its peers in the move towards a lower carbon economy, and certainly behind that other great nation led by a right of centre female chemist – Germany under Angela Merkel. And many of Mrs Thatcher's successors in the Conservative Party would do well to heed those early words spoken almost 25 years ago – especially the UK's current Prime Minister who should note that her words were supported by action as national and international levels.
Posted by EnergyDon at 14:15 No comments:

No longer Beyond Petroleum?


BP has indicated that it is looking to sell its US wind farms, at a possible loss of over $2 billion.  With this move, BP will once again be focused almost exclusively on petroleum ending the ground-breaking diversification into alternative energy under the leadership of Lord (John) Browne.  The vision of forming a company that provided the energy its customers needed to power their lives, but from a mix of increasingly low carbon sources encapsulated in the "Beyond Petroleum" slogan has long disappeared.  Of course, the strapline hadn't really been used for several years, and was being downplayed even before Lord Browne left the company in 2007. 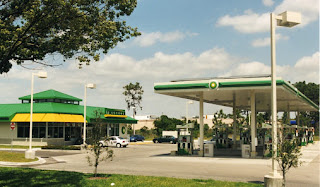 Just over a decade ago, around the time of the BP-Amoco merger, BP looked as if it might become the first of the oil majors to diversify away from fossil fuels, and address the need to create a lower carbon economy.  Throughout the 1990s, BP was one of the leaders in solar cells and Amoco – through its Solarex subsidiary – was a large player in the growing US market.  BP exemplified this by adding solar panels to the canopies of many of its Connect filling stations and prominently displaying the amount of carbon-free energy generated.  After the merger with Amoco, in 2000 the company also adopted a new "helios" logo to replace the shield that had been used for over 60 years: this could be seen as signifying solar energy, or crops such as sunflowers. 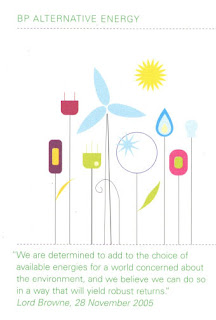 So what went wrong and why were the wind farms such a poor investment?  BP's investment in US wind has suffered from two factors outside its control and largely unpredictable. The first is that despite high oil prices, other energy prices have not risen as much as anticipated, most recently due to the discovery of how to extract vast quantities of cheap gas from US shale formations.  This has had a knock-on effect on electricity prices, making renewable energy even less competitive on purely financial grounds.  And though Lord Browne knew that climate change should have led to an effective carbon tax, this has never been introduced into the US, keeping conventional electricity more competitive.  Despite the low prices for renewably generated energy, the cost of new wind turbines has fallen faster than anyone foresaw due to over-capacity among Chinese manufacturers.  This has had a knock-on effect on asset valuations for existing wind farms; it is often cheaper to build a new one than it would be to take on an old one at its depreciated value.  (A similar Chinese effect has affected solar, contributing to BP's exit from that renewable after more than 40 years at the end of 2011.)

BP has a third factor, unique to the company – a need to raise capital to fund the clean up and fines after the Macondo disaster.  Inevitably this has made it focus on non-core assets that can be sold – and wind farms, often held in joint ventures – were an obvious candidate.

Despite this, BP has not totally abandoned alternative energy.  For the time being it remains a major player in liquid biofuels, especially in the USA where it is still named by Biofuels Digest (alongside Shell, but no other petroleum companies) as one of the 10 leaders in the field.  Of course this is an area much closer to BP's traditional road fuels business, and one where its lower cost of capital than smaller start-ups can still give it a competitive advantage.

But I for one will be sad to see the end of the idea of BP as a truly integrated energy company, investing in new cleaner forms of energy, with the hope that it might in our lifetimes achieve what we all find so hard to do: it might really have moved Beyond Petroleum.