Who dunnit? How to attribute CO2 emissions between nations

In my last blog, I referred to the relative simplicity of calculating an (approximate) carbon footprint.  Of course there's a lot of mystique around it (and an increasing number of relatively well-paid experts), but the fundamentals are not exactly rocket science.  Maybe some of the solutions should be kept equally simple and not made overly complex.  So if we can calculate our footprint here and now, perhaps we can also travel back in time and find out how much we have been responsible for historically?  This is not just a matter of academic interest, as developing nations contend that those that have been industrialised for longer periods have been greater contributors to the problem, and so should bear more of the burden in reducing future emissions and mitigating damage caused by past emissions.

There have been a number of attempts to do just this, and work out the share of cumulative greenhouse gas emissions attributable to each country.  It's far from being an exact science, as there are inevitably gaps in data and some pretty broad assumptions need to be made, but it's still - in my view - a worthwhile exercise.

The latest estimates can be found in Environmental Research Letters, an open access academic journal published by IOPscience.  As with personal or corporate footprinting, the key decisions are around boundaries and scope.  The boundaries are quite simple - nation states - but have a time factor as well: in this case going back to 1800 as being roughly the start of the industrial revolution, when coal began to display wood (and to a lesser extent wind or water power) as the main source of energy.  Pre-1800 use of coal was globally so low as to be lost in the rounding errors of carbon calculations.

This choice is however controversial, as early industrialised nations, such as the UK, were using fossil fuels in complete ignorance of any potential risks to the climate. It contrasts sharply with (say) the Sandbag Report on Sovereign Emissions (direct link to PDF report) which starts measurement at 1990, when the first IPCC report was published assessing the dangers of climate change.  Prior to that, most governments and citizens were unaware of the real risks from using fossil fuels (although the science had been understood for a while).

The Environmental Research Letters Report differs from most other estimates in a second important respect; as well as looking at emissions of the main greenhouse gases, it takes into account land use change and the effect of aerosols (not the ones used for deodorant, but a form of air pollution arising from sulphates emitted in burning fuels such as coal and that have a generally cooling effect on the climate.  These factors are quite significant and lead to some surprising countries having a net global cooling effect - including Chile and Kazakhstan.

The Report also converts cumulative tonnes of carbon dioxide equivalent (that snappy measuring units that geeks like myself love, but is hardly user friendly) into a contribution towards global temperature rises.  As you would expect, the top three contributors are the usual suspects: the USA, China and Russia, but Brazil slips in at number 4 and the European nations are headed by Germany, the UK and France at 6, 7 and 8.  On this metric, the USA is responsible for 0.151°C of global climate change, with China less than half that at 0.063°C.  Britain's 0.032°C  is actually double that of France, just one position below it in the league table.  And of the positive nations, Chile and Kazakhstan's reduction is less than 0.005°C: 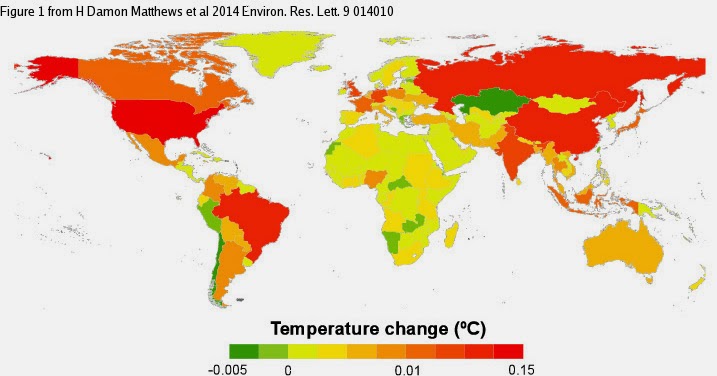 Of course this is quite largely about population so the Environmental Research Letters Report goes one better, and relates to changes per billion inhabitants.  (It could do it per person, but that would give teeny numbers.)  This can be seen graphically below and has a surprising (to me) nation heading the table - the UK: 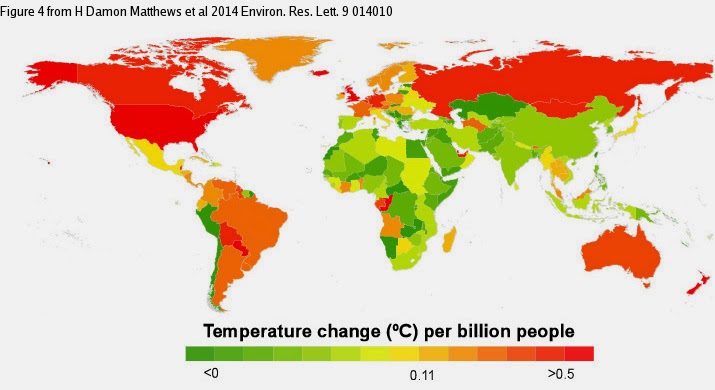 On this measure, red is bad (major contributor to global temperature change).  The UK has 0.54°C temperature rise per billion inhabitants, the USA 0.51°C, with Canada, Russia and Germany filling out the top five places.  China and India are near the bottom with around 0.04°C.  It should be added, that the report's authors only consider the top 20 emitters in this table, so although India is listed 20th on a per capita basis, it would be a lot lower if other countries were included.  It's also likely that the UK would lose its top spot in this "naughty league" to a smaller energy intensive user, such as Luxembourg or even Qatar or United Arab Emirates, which although they have only become large users of energy in relatively recent periods, are among the very largest users today.

So is this a fair measure?  I'm inclined to say "no", for several reasons.  Firstly, it's a little unfair to blame us for actions taken in complete scientific ignorance - I might not start the clock as late as Sandbag's 1990 baseline (as I personally was well aware of the likely problem in the late 1980s, and indeed so was Mrs Thatcher).  Maybe we should look at a weighted emissions, with 1800-1980 ones less culpable than more recent ones.  Secondly, the method looks only at direct origins of emissions, and ignores the fact that many of China's emissions (for example) may be attributed to Western demand for cheap goods, sometimes manufactured to less environmentally exacting standards.  Thirdly, there is always a problem of blaming children for the sins of their fathers; we should be judged on our current efforts to minimise emissions more than on what has gone before.  And at a national level, should recent immigrants be penalised for what long-standing residents have done?  (Even someone as apparently English as I am can point to a great-grandfather who immigrated from Ireland around a century ago, although at the time Ireland was part of the UK, too...)

But, even if it's not quite fair, it is still a useful exercise to help us think about long term responsibility.  And this doesn't just mean looking backwards at what our parents did, but also the responsibility that we have to future generations not to trash the world that they will be inheriting.

Posted by EnergyDon at 12:34 No comments: