Moving home often gives us a chance to take stock and think about all the changes since we first set foot in the old home. Moving websites can offer a similar opportunity for reflection, so as I have just moved the Simple Carbon Calculator (www.carbon-calculator.org.uk) I thought I would reflect on changes in that field.

By way of background, this Carbon Calculator (and there are others, I admit) has its origins as a challenge to myself and to support those in the Energy Efficiency Accreditation Scheme. Back in 2001, the UK's Department of Food and Rural Affairs (Defra) had not long published its first guidance to companies on calculating and reporting carbon dioxide (CO2)emissions. Meanwhile, I had been tinkering with websites, and rather fancied seeing if I could convert their guidance into a simple calculator using a newfangled tool called JavaScript. So I took an open source bit of code and - necessarily - simplified Defra's factors a little to produce a basic calculator that you could enter energy use in normal units (kWh, litres, tonnes or other everyday values) and end up with a CO2 value compliant with Defra's numbers.

Over the years, both Defra and I (quite independently, I must add) have enhanced the tools. But as Defra's has become ever more complex with over 4,000 conversion factors at the last count, I have tried to keep mine...simple. That's not to say that it's not useful; I believe that over 90% of households or companies could use the Simple Carbon Calculator to calculate their footprint within 5 minutes (assuming they had their energy consumption data to hand). And Defra's guidance notes and tables, along with 50 pages of assumptions are always available for the other 10%. (Incidentally the background paper, written by Ricardo-AEA is fascinating for use carbon nerds, but lacks the actual factors deduced from their discussions.)

This leads to a key point: calculating a footprint need not be terribly complicated; it's just a question of (a) having all the right data to hand and (b) knowing which are the right factors to use - and the aim of the Simple Carbon Calculator was to at least partly meet the second bit.

At the start, though, I said I would reflect on the changes to the actual calculation, rather than to website techniques which have rendered my old JavaScript "not modern enough" to stay on the previous host site.

First and foremost, the electricity factors have changed conceptually, twice, over the past12 years. When first created Defra thought it was best to use a marginal factor - ie. the emissions associated with generating an extra unit of electricity. In the UK, this was assumed to be electricity from a combined cycle gas turbine (CCGT) as they could be switched on and off most easily (try doing the same with a nuclear power plant...) However CCGT emissions (which were fixed for several years at 0.43kgCO2/kWh) tend to be lower than average UK emissions (which included older gas stations and coal). So although it might be fine for a company or person at the margin, if you started adding up emissions from everyone calculated on this basis, you severely underestimated total emissions.

Recognising this problem, in the mid-2000s Defra moved to a five year rolling average. This captured longer term trends and wasn't unduly buffeted by abnormal power stations (such as nuclear power stations breaking down, which they seemed to have a distressing tendency to do). However over the past few years this has tended to lead to the opposite error, as coal power plants were mothballed and new zero energy generation - especially from offshore wind - has come on stream.

So, for 2013, we have all moved onto a prior year basis, on the grounds that the generation mix last year is probably the best indicator of what it will be this year. This has meant restating prior years (and miraculously losing emissions for the average user), but is probably the correct answer intellectually, unless someone can develop a 12 month forward weather forecast to estimate future wind energy production! However, we may find the downward trend reversing as US shale gas depressing the demand (and hence global price) for US coal, leading to more imports into Europe for power generation.

As you might expect, emissions for fuels (both gaseous and liquid) have tended to be less variable. However even there we find some trends emerging over the last 12 years. Natural gas, which once came almost wholly from the North Sea, is now increasingly coming in by ship from North Africa as LNG (Liquid Natural Gas) - as much as 20% in recent years. And although the Simple Carbon Calculator is designed for Scope 1/Scope 2 emissions (not full "Well to wheel"), Defra's factors do recognise the much larger carbon footprint of LNG.

Road fuels have also changed. Partly as a result of the EU biofuels directive, both diesel and petrol have a small biofuel component, and this has led to a slight drop in the carbon intensity of the fuel, as carbon from renewable sources is not included. That's not to say that biodiesel or bioethanol have anything like a zero carbon footprint; just that it's a bit lower than the equivalent fossil fuels.

Emissions from aviation are a great concern, as the fastest growing source globally. We have always known that the effects of planes flying at high altitudes was not just as simple as their CO2 emissions, but that there were other effects, such as vapour in contrails that also exacerbated climate change. Well, finally this year Defra has accepted the arguments and included an uplift for "radiative forcing". Of course this means that for a typical middle class household flights are suddenly a much larger component of their carbon footprint... 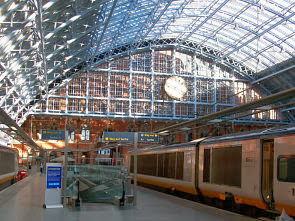 As the calculator has grown in popularity I have added refinements and extra categories, while keeping to the concept of keeping everything on a single easy to use page. This year's enhancements included a much wider variety of default vehicles for those who know the approximate distances driven, but don't have records of fuel purchased. And, as an antidote to higher flight emissions, I have added Eurostar emissions - although these always seem unnaturally low as they are largely based on purchases of French nuclear electricity, and hurtling across Northern France at 300km/h may not be wholly environmentally benign!

So if this has whetted your appetite to find out your own footprint, I ought to tell you where the calculator has moved to. It's still at www.carbon-calculator.org.uk (and don't forget that hyphen), and may also be returning to its old host if I can negotiate with the new style gurus. Or it may be demolished and replaced with something even better, though perhaps not quite so simple to use.
Posted by EnergyDon at 15:12 No comments: